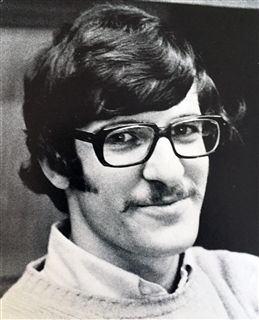 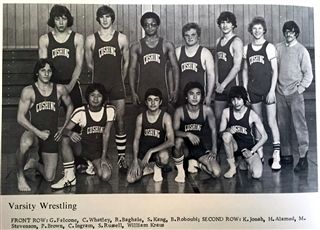 From Chris Ingram '79
Before Cushing, the extent of my athletic experience revolved around climbing trees, swimming, and riding my bike on some pretty long trips. My brothers (including Dave, '76 and Rob, '79) were the athletes, and I was an outsider to the world of organized sports.

Even at CA, my athletics career began as manager of the baseball team, and opting out of winter sports for the first half of the old "swimming & skating" program in Winchendon. But for some reason, when we started a wrestling team in '77-'78 I decided to jump in with both feet. Coach Bill Kraus was there to catch me, and that, as they say, made all the difference.

Coach Kraus had a quiet, firm demeanor that told us what was expected of us and the consequences of not meeting those standards. He only stood a bit over five feet, and had the physique of the top-level marathoner that he was. And with a high school national championship under his belt, he knew what he was doing. I don't think I ever heard him raise his voice more than once, and that was out of disappointment in our failure to meet our goals. Losing a match wouldn't upset him, but seeing us fail to do what he knew we could achieve would.

In this way, we came to expect more of ourselves than we (certainly I) had ever dreamed before. Under Coach Kraus, this tree-climbing, lap-swimming cyclist was able to put the benefits of those pursuits (strong grip, muscular endurance and cardio) to good use. And I joined my brothers as another Ingram who captained a varsity team. The focus and intensity I learned on the mats have served me to this day, and I'll never be able to thank Coach Kraus, and Cushing, enough.
Back

Cushing Academy exists for students and develops curious, creative, and confident learners and leaders. Founded in 1865, Cushing is a co-ed, college preparatory boarding and day school for students in grades 9-12 and PG. Our students, who come from over 30 states and 30 countries, excel in our outstanding academic, art, and athletic offerings. We welcome you to visit our community and beautiful 162-acre campus in Ashburnham, Mass., just one hour from Boston, to experience all that Cushing has to offer.
Privacy Policy