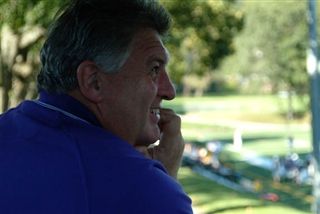 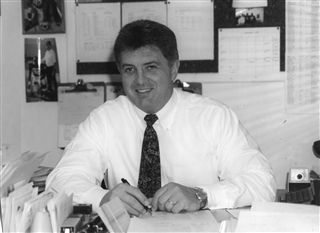 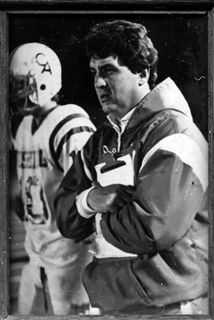 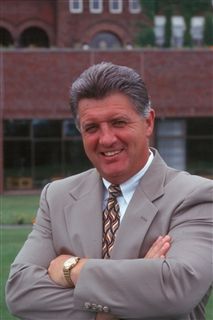 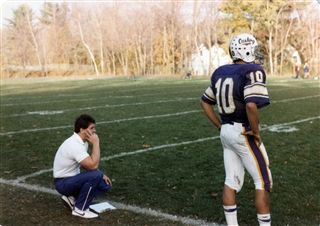 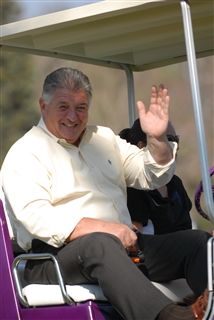 From Chris Ingram '79
I first met Coach Wayne Sanborn outside his office in the bowels of Heslin Gym in September of 1975. I was an unathletic freshman, and had gone with my twin brother Rob to sign up for football. I had no experience, Rob had a few years' worth. When I quit the team about a week later, the look in Coach Sanborn's eyes was of total dismay. He shook his head, in disgust, I thought, and I walked away.

I got to know him a little better as a sophomore, shooting the game films (yes, films!) every Saturday. It was a hell of a season, culminating with the undefeated Penguins traveling to Tilton, NH to take on the also unbeaten Rams in the final game of the year. It was a tough game, and we were losing at halftime. It was during this intermission when I saw how much Coach Sanborn meant to his players. One of the captains asked for a private players meeting, so the coaches filed out, followed by me. But the captain told me to stay. His voice broke with emotion as he implored his brothers to fight for every yard, every first down, every point, not for themselves or for glory, but for Coach. Then this very tough, gifted athlete used a word I never expected to hear in a locker room full of bruising football players. He said he loved Coach. He said he loved him because Coach been there for him every step of his time at Cushing. He said Coach deserved this win for all he'd done for every person in that dank, chilly locker room. It was a rousing, raw, emotional address, and everyone there was energized.

Well, we lost that game. That's one of the lessons you learn through sports: Sometimes - no matter your heart, your training, your dedication - sometimes, you lose. But the mark Coach left on his players every year would last far longer than any season.

I learned that myself, as a beneficiary of Coach Sanborn's ambitious athletics program. By senior year, I had become a fair-to-middling 138-pound wrestler. When I was elected co-captain, I thought about what kind of leader I could be. Immediately, the image of our Athletic Director, out on the football field on Friday mornings painting the lines himself, came to mind. Coach Sanborn wanted the best for us, and no task was too menial in that pursuit. I decided that, on top of the usual teaching and drilling duties of a captain, I would take on the responsibility of disinfecting the wrestling mat every day. Ordinarily, mopping the mat was a task for the newcomers and beginners; a sort of rite of passage. I felt that Coach Sanborn's example was better: Humility in the pursuit of excellence, you might say. We rarely won a meet in those tough early years, but we were given the best opportunity to achieve. We wrestled in the Class A league, though we were one of, if not the, smallest teams in the league. That's how I learned that in order to be my best, I needed to face the best. We could have wrestled a less-demanding schedule against like-sized schools. But Coach Sanborn, in resurrecting wrestling at Cushing, clearly wanted us to face the toughest challenges available to us. And our schedule made sure we would.

One of my proudest moments was when I climbed the stage steps in Cowell Chapel to accept the "Most Significant Contribution to Cushing Academy Westling" trophy. The hardware was great. But what meant more to me was the look of genuine pride on Coach Sanborn's face. I realized then that the expression I had seen four years earlier wasn't really one of disgust. It was one of disappointment. He saw me quitting; giving up on myself. I'm forever grateful that, thanks to Coach Sanborn, I had the chance to try, and fail, and win, again.

If I were to briefly sum up what I learned from Coach Sanborn, it's that winning teams come and go. That's one of the rhythms of life. But what must never be forgotten is the duty we have to ourselves to seek out the toughest challenges we can, and to make the sacrifices necessary to meet them, win or lose. I know I'm only one of thousands who can say "I love Coach Sanborn." But I do love him. And all of his efforts, the thousands of sacrifices, great and small, that he made for us over the years are proof that he loves us, too.
Back

Cushing Academy exists for students and develops curious, creative, and confident learners and leaders. Founded in 1865, Cushing is a co-ed, college preparatory boarding and day school for students in grades 9-12 and PG. Our students, who come from over 30 states and 30 countries, excel in our outstanding academic, art, and athletic offerings. We welcome you to visit our community and beautiful 162-acre campus in Ashburnham, Mass., just one hour from Boston, to experience all that Cushing has to offer.
Privacy Policy